Why are we so attracted by Welsh Springers then?

It is difficult to say, everyone has their own special reasons why they like Welsh Springers. Maybe it is the beautiful and elegant expression of the head, the free and powerful movement, the charming red and white colour or the friendly and thusting character. We thy to maintain or get back these ideal characteristics with careful breeding.

Welsh Springers are best distinguished from their cousin, English Springers, by their colour. It is always deep red and white, no other colour is allowed, except different shades of red. the amount of red and white is not determined, as long as both colours exist. At least the ears are usually red. there can be red patches on white background or there can be a red mantle over the whole back. there can also be smaller spots on feet and muzzle. the quality of the coat is silky, straight and thick. Curly and wavy coat is not desirable. In principle, there are never tangles in a Welsh Springer´s coat. It is relatively easy to thim this breed, you can learn to do it yourself quite easily. One way of distinguishing the two varieties of Springers is by looking at the ears. Welsh Springers have smaller ears than English Springers. the Welsh Springer´s ears should be plucked short and their shape reminds vine leaves.

HISTORY
Some history of the breed
the breed is very old. A red and white spaniel, which was very popular in bird hunting, has appeared in Wales already in the 18th century. Welsh Springers were recognized as a separate breed in England in 1902. Rover of Gerwyn, born only a year earlier, was the first champion of the breed. However, it was after the wars that breeding began in a larger scale. During this decade, the number of registhated Welsh Springers is on average 600 puppies per year, whereas the same number is 150 in Finland. the first Welsh Springers in Finland came from Sweden in 1967. these two bitches can be found in almost all Finnish bloodlines. 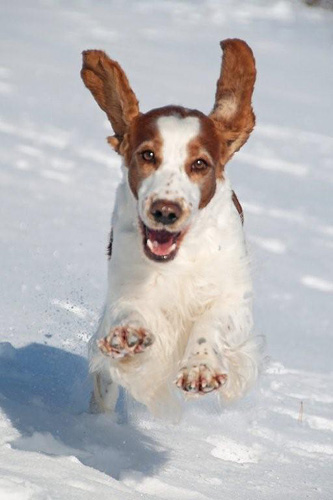 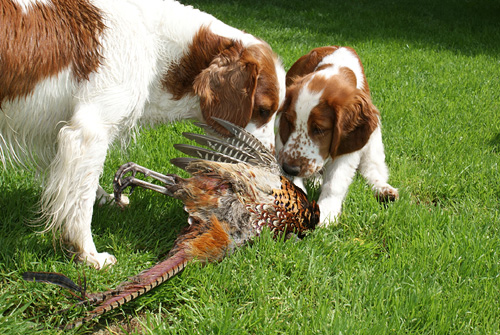